Mining hard coal on Svalbard is not profitable. But the governments in Oslo and Moscow are holding on to it for strategic reasons.

SVALBARD taz | The North Pole is closer than Oslo or even Moscow. On the approach to Longyearbyen, colourful wooden houses stand out against the mountain massif in the shimmering bluish light of the polar night. Because of the permafrost, they are built on stilts. About 2,000 people live in the small town, with the Longyearbreen glacier flowing past within sight. The sun will not rise above the horizon again until the beginning of March.

Coal has been mined on Spitsbergen for about a century. Conveyor belts made of steel cables, from which mine cars hang high in the air, line the Arctic town like metal garlands. The mines have long been closed, except for pit 7.

Despite the sharp drop in the price of coal, the Norwegian government has agreed to open up another mining area. This is less about the coal itself than about securing the livelihood and strategic importance of this city through it.

The northern seabed is rich in raw materials that are being exposed by the melting of the ice caused by climate change. In particular, hopes are growing for large quantities of natural gas and oil. Arctic property rights are the subject of tough negotiations in the Arctic Council and before the UN Convention on the Law of the Sea.

Special conditions for the workforce

"The Norwegian government does a lot to make people stay," says Jannicke Darre Hirsch. The young woman has been working in Longyearbyen for three years. "Compared to mainland Norwegians, we enjoy huge tax breaks." Hirsch stands in front of a wall of photographs of leaping polar bears and soaring waterfowl; WildPhoto Travel & Gallery is a travel agency of sorts. A good salary and a serviced flat attract young Norwegians in particular to the Arctic. The concept seems to be working, Jannicke Darre Hirsch wants to stay a few more years.

In the winter months, people travel by snowmobile. They have to bring a spirit of adventure with them, because even for a small excursion outside the city limits, it is advisable to take the rifle with you because of the polar bears. The community on the Arctic archipelago assumes that you are capable of looking after yourself: there are no old or sick people, and to die you would have to go to the mainland anyway. No people are allowed to be buried on Svalbard - because of the permafrost.

The Svalbard Treaty Norway has had unrestricted sovereignty over the Spitsbergen archipelago, which lies between 74 and 81 degrees north latitude, since the Spitsbergen Treaty came into force in 1925. The treaty was first signed by Norway, Denmark, France, Italy, Japan, the Netherlands, Sweden, the USA and Great Britain; in the meantime, other states, including Germany, have joined. What is special about the treaty is that although Spitsbergen is under purely Norwegian administration, it contains a so-called non-discrimination clause. This means that all signatory states have the same rights to use the archipelago.

Store Norske is the largest employer in Longyearbyen - even though the company had to lay off workers last year. A small lorry stands in front of the company headquarters, while the pounding and clanking of industrial transport equipment can be heard on the opposite side of the street. As everywhere, one is asked to take off one's snow boots when entering the building. Slippers are always available.

Marketing manager Aleksander Askeland enthusiastically shows Lunckefjell on a wall map - the new development area that lies even deeper in the mountain. "We can continue with this for the next twenty years," he announces, pointing out that it will improve the quality of steel production. The manager does not see the unique ecosystems in the Arctic at risk. With a wink, he admits that most of the coal is not burnt in Norway.

In contrast, UN Climate Secretary Christiana Figueres had called for the immediate closure of all coal mines during a visit in 2014. Mining is difficult to reconcile with Spitsbergen's new label as an international climate research centre.

In the "Svalbar", a pub in town, beer is available without VAT, considerably cheaper than on the mainland. A troop of young people rush in, a colourful mix of international students, all wearing wind- and waterproof functional clothing. The University of Spitsbergen is a branch of the Norwegian universities, which is constantly being expanded through cooperation and research projects. The local guide goes to the bar and hands over his rifle to the barmaid - a bit of the Wild West in the far north.

The journey in a snowmobile from Longyearbyen to Barentsburg, 60 kilometres away, takes two hours. While in summer the midnight sun doesn't set for months, in winter the landscape of glaciers and fjords is bathed in diffuse shades of blue and white. Massive concrete steel blocks rise up in the middle of no-man's land, painted mint green, blue and old pink, as if to make up for the inhospitable nature of the area. The Russian enclave of Barentsburg had turned into a ghost town over the last twenty years: black snow, deserted streets. Now the place is being turned into a tourist attraction.

The state-owned company Trust Arktikugol already existed in Soviet times, supplying the cities of Murmansk and Arkhangelsk with energy. Even then, coal mining was hardly profitable here, and little has changed. Conversely, supplying the place by ship and hoist is very cost-intensive.

"Tourism is expected to surpass coal mining by far in a few years," says Ivan Velichenko, an athletic young man with large earrings, in fluent English, grinning as if he doesn't quite believe it himself. It is still the polar bonanza that attracts mainly Ukrainian miners to the Arctic. It provides for higher wages and an extra payment after two years.

In an apartment building, Russian colleagues of Ivan's are lounging on a sofa. They are watching a medieval series on a flat screen and nibbling roasted sunflower seeds. Danila Trofimov, Maria Petukhova and Dimitri Alexeyev work in the tourism sector. Danila, a barman, sings the praises of '78 vodka - there is an old sailor's saying that the promille content of the drink must correspond to the latitude. In the summer months, he takes tourists by boat to the disused Russian miners' settlement Pyramiden.

Wiktor from the Donbass

"We all have a chip card on which our monthly wages are loaded in roubles. We can go shopping and eat out with it," Danila Trofimov says. In the workers' canteen at Arktikugol on this day, there is beetroot salad drenched in mayonnaise and cabbage soup. Viktor Terjanik's shift has just ended, his eyes are black-rimmed. He finishes spooning his borscht, then starts talking. Like most of the workers, he comes from the Donbass basin and is glad to be here. The engineer checks the machines underground and controls work processes. He initially has only a three-month contract - with an option to extend. "I hope that I can earn money here for two years and that the situation in my home region will ease again," he says.

Barentsburg was a socialist model city in Soviet times. Even today, clear rules apply: Anyone who steals is given one warning and then sent back home. However, the still legible slogan "Our goal is communism" next to the statue of Lenin looking out over the Greenfjord is rather smiled at. "You are too modern in Barentsburg, some tourists complain," Timofei Rogoschin says with amusement. "You are far too little 'back to the USSR'." Rogoschin is the manager of Tourist Artikugol, an offshoot of the mining company. His reddish curls stand wildly on his head.

Since 2006, almost all the buildings in Barentsburg have been renovated, and in 2012 the city opened its own brewery, the northernmost in the world. However, only light beer with 2.6 per cent alcohol is served there. The Norwegian administration does not allow more. Likewise, only one bottle of vodka and one kilo of sugar per month are allowed for Barentsburgers.

Rogoschin, who grew up in Murmansk, thinks nothing of preserving and playing with the Russian enclave as a "Soviet backdrop". This place has long since arrived in another time, he says, and talks enthusiastically about the place's museum. Here, exhibitions, music and dance events will reflect the diversity of cultures that have come to the Arctic in the course of time: among them Swedes, Dutch and Pomors, a Slavic ethnic group that settled on the White Sea in the 12th century. In the future, they also want to offer tours to the old whalers' cooking sites as well as canoe and snowmobile trips - and not only for Russian guests.

Rogoschin is counting on the young, educated Russian generation - like Maria from Moscow and Ivan from Petersburg. Everyone here has to do something, that is normal, says Viktor Terjanik, the miner from Donetsk. He is not afraid of the long polar nights. In Ukraine, he always leaves in the dark in the morning. It never gets light underground anyway. 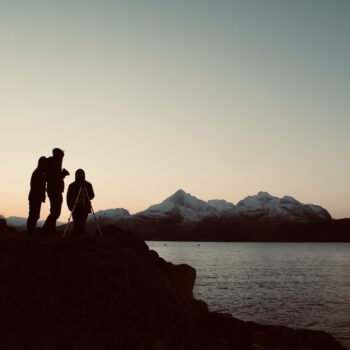